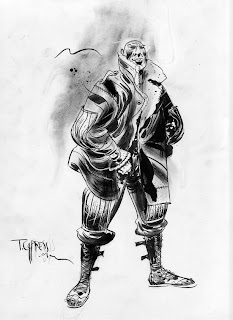 "...Ace Racer, mastered horsepower, and survival. This veteran of street racing was recognized as the arena's best racer 1920-1928 before retiring atop the racing world.

In retirement, Blakey opened his own shop customizing engines, again earning distinction as the arena's best technician as his engines continued to win matches for younger racers.

1932, Blakey mentors Rodd, and Susie (Rodd's fiance) into a powerful racing team. Teaching Susie how to build a powerful car, and teaching Rodd how to handle the aggressive maneuvers demanded in the horsepower.

1939 a destructive gambling habit forces Blakey to turn to Sidd Vicious, and his Yakuza gangsters that run racing for assistance. Sidd offers Blakey a clean debt if he returns from retirement for one more match of exhibition in the arena of street racing.

Blakey did not survive the exhibition as his car exploded in a terrific ball of fire as he neared closer to his final victory. It is rumored that Sidd made a substantial sum on Blakey's death."

Blakey is sort of the backbone of the story. He's referred to alot but we rarely see him. He died a couple years before our story begins. But Blakey is my favorite character in the story. He represents my mentors, alive, and dead that have influenced me. In the story he has a presence that is almost like a ghost, or a guardian angel.

When times are tough professionally, or privately, I often think back to my favorite artists, mentors, friends, or family and try to imagine how they might approach a challenge, or solve a problem. Sometimes it's easier to get thru the tough times when I feel I'm not alone in this thing...so I wanted a character in the book that also communicates that in me.

Blakey represents myself the most, as the artist, teacher that I hope to live up to. In my life, my most rewarding moments have occurred while teaching illustration to talented students. So, Blakey has been the easiest character in the book to identify with.

Blakey is named after my favorite musician Art Blakey of the "Jazz Messengers".
-T
Posted by Toby Cypress at 12:06 PM 11 comments: 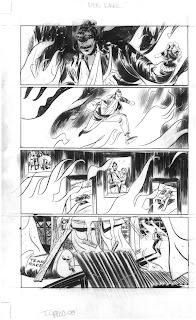 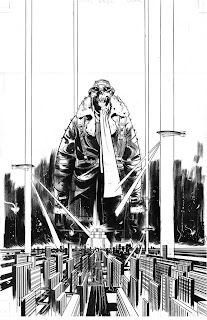 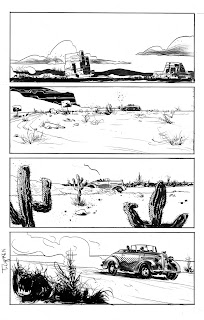 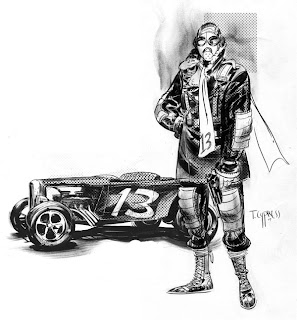 Drag' On.
A tragic, and mysterious figure in the story.

"Kirko was one of the greatest young racers of her time, and poised to assume many of racing's most cherished records before a horrible accident cut short her attempt for a 13th straight victory. The beautiful young racer died on the track that day, but was offered a new chance to achieve her glory when the Yakuza Crime Clan resurrected Kirko with cybernetic twitch react/response reflexes that have enhanced her skills for deadly purpose.
Drag' On was born, a lethal racer, and...now a lethal hitman for the Yakuza Crime Clan."

Drag' On is one of the antagonists of Rodd Racer, and in a way, plays the greatest role in the story.
Both Rodd, and Drag'On have very similar purposes for their lives, but chose different paths to achieve them.

I think Drag' On represents myself at my most creative, focused, and most risky. Those are the times I tend to be my best.
But I also sacrifice a lot of myself, my family, friends because I can become very focused on my goals, and forget about what really matters in fulfilled living.
-Balance.
Drag' On has chosen to go a bit too far in one direction...and that could lead to people dying ;)
-T
Posted by Toby Cypress at 7:50 AM 9 comments: 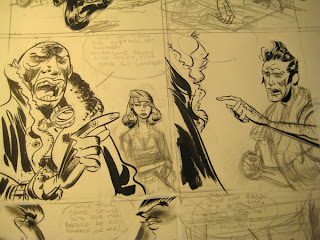 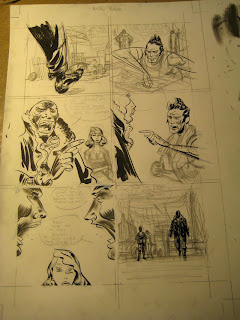 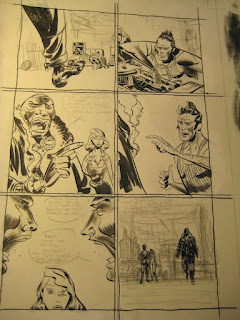 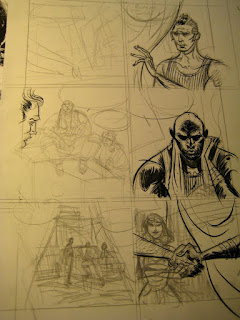 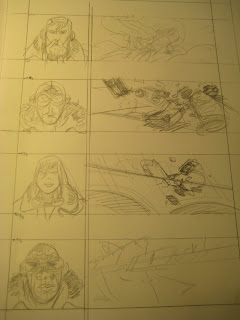 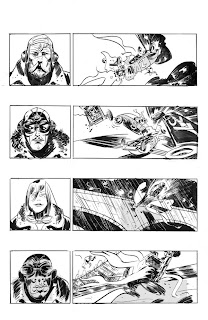 Wanted to post a little rough work.
Sorry for the poor photos...
Here you can see how loose my pencils are when I start inking. I like to keep my inks looking very spontaneous, and alive if possible. So, I pencil very roughly...mostly focused on space, gesture. All the details are fleshed out, and finalized in my inks, this way I feel like things don't look too stiff, or "polished".

You can kind of compare photos 2, and 3. I had alot of rough stuff to decipher, panels 1,2, and 4 kind of show how I interpreted my loose pencils, and cleaned them up in the inks.

Photo 5 shows my typical "penciled" page, where I stop penciling, and start inking. I've had enough experience inking my chicken scratch that I can understand what I'm going for without a laborious drawing tightened to death.

I mostly learned how to ink my loose pencils by deadline. I simply never had the time to pencil and ink, so I had to learn how to do both at the same time.


...next time I hope to post some more on the Characters of Rodd Racer.
See you then,
-Toby
Posted by Toby Cypress at 9:51 AM 16 comments: